An impressive flotilla of old-fashioned wooden skiff boats adorned with Royal flags has made its way up the Thames from Windsor bridge to carry out the annual Royal Swan Upping.

The Upping is the official process of counting the swan flock on the Thames in an attempt to help conserve the population. Following an outbreak of avian flu earlier in 2018, the Upping was seen as particularly important this year.

Speaking to the Windsor Express, David Barber, the Queen’s official swan marker, who was in charge of this year’s Upping, said: “It’s been the first time it really hit the Thames hard and it was very, very difficult to deal with in Windsor.” 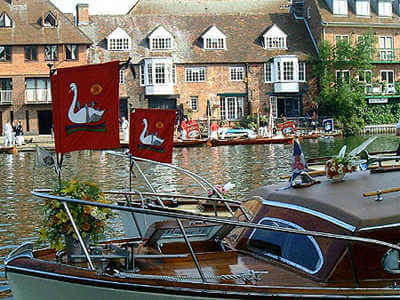 However, the official count found some 200 birds were still living in the area, much to the relief of conservationists.

The Royal Swan Upping has been taking place for centuries and has its roots in the Middle Ages when the Royal Family declared that all ‘unmarked’ swans in open waters belonged to them. During that period swans were seen as a prized delicacy. The event takes place for five days each summer and begins on the third Monday of July.

These days the practise is very much about conservation and each swan identified in the Upping, which happens between Marlow and Cookham, is weighed and checked over for illness.

The Royals still play an active part in the Upping, with Princess Anne getting involved this year by observing the annual swan census in Marlow.

In Flanders fields the poppies blow Between the crosses, row on row,     That mark our place; and in the sky     The larks, still bravely singing, fly Scarce heard amid the...